I’ve said it before and been met with confused stares but I will say it again: after working hard, a beer in the shower is great. Whether your gutter fell off the front of your house and you had to put it back up, or you are painting your kitchen (both of which I did this weekend), when the shower is cooling you from the outside, a cold beer cools you from the inside. Try it, you’ll like it.

Note to beer nerds: Yes, I know you are not supposed to drink beer freezing cold, it keeps you from tasting the Fuggles etc. – but Beer in the Shower is about cooling you down and the psychological benefits of beer as a symbol of relaxation.

Today Kathy and I spent 6 hours on a train – 5 of those stuck in the tunnel between NJ and NYC. Apparently the entire Amtrak system from DC to Boston lost power. We were about 5 minutes from the city when it happened.

I don’t blame the conductors obviously, but NJ Transit / Amtrak / whoever was completely unprepared and the situation was a constant flow of misinformation. After several hours they told us that diesel trains were being used to tow the disabled trains out. There were 2 trains ahead of us. They announced that the first train had been towed. About an hour after that they told us the second train had been towed and a separate diesel was standing by to tow us as soon as the second train was cleared. Then…. nothing. For a loooooong time.

By now even the emergency lights had died so we were sitting there in pitch blackness. Still no announcements.

At this point it turned out that the power had been restored… but since our emergency battery was dead we could not re-raise the pantograph to the electric wires. The manual system failed. Yep, you need to have power to be able to reach the power.

No one ever told us what happend to the diesel that was supposed to tow us but it never arrived.

Eventually they pulled up another train behind us. At one point a very pregnant lady came through, breathing hard and attended by a doctor and a nurse. Some firefighters came through to ask if everyone was OK. Lots of time went by. We all walked back through the disabled train to the new train. Then we backed up to Secaucus station.

There, the train doors opened and they said something along the lines of “You can get off here but we don’t know what trains are running. Stay on the train if you want to go to New York.” At this point it was about 1:30 (we had gotten on the train at 7:18). While we were sitting there, a Trenton-bound train pulled up on the other side of the platform. I was looking at the NJ Transit website on my Treo and the latest news (from about 10 minutes earlier) said that Northeast Corridor train service was suspended. That was good enough for us – no point in continuing to the city just to get stuck there. We finally got home a little after 2pm.

Last night I tried to resolve some of the problems I had on Saturday night. The first task was to recollimate the scope and make sure everything was OK in that department. Kathy helped me out, turning the screws while I watched through the collimation eyepiece. It turns out that everything was lined up so I can scratch that off the list of potential problems. I also spent a few minutes getting my finderscope aligned more accurately so when I switched eyepieces or inserted the camera I would be able to reacquire quickly. This was a really important step and definitely paid off.

I had turned to a couple Yahoo Groups I belong to for answers and got some good advice. As far as the barlow lens goes, it turns out that the Celestron “shorty” barlow is not compatible with my scope. Doh. I had researched that before but either I misunderstood what I read or the info was faulty. In any case, I need a full-size barlow to work with this scope.

In the NexImage group, someone gave me some hints about settings to use to get something more than a white blob. The results (the teeny Saturn you see here) were better, but not great. The camera image is still quite washed out, while with my eye I could see the Cassini division in the rings.

The problem with doing astrophotography with a dob (which everyone told me all along) is that without a tracking mount, it’s tougher to keep the object in view while you’re doing it. I just didn’t realize how fast the objects would move! I’d say it’s approximately 7-10 seconds from entering the frame to exiting it. Combine that with some trial-and-error on the capture settings and here’s how I ended up last night: working the mouse with my right hand, reaching across myself with my left to the tiller of the scope, trying to keep Saturn in view while adjusting the gain and saturation controls. The image will improve once I get a barlow that I can use with this scope – but then the planets will be moving twice as fast in the viewfinder!

Once I finished my photography attempt I took a look at Mars. It was sort of disappointing, looking pretty much like a star. With the 9mm eyepiece it was juuuust starting to resolve into a disk. Again, once I have a working barlow this will change.

Before I put the scope away I just sort of wandered around the sky. Near Saturn I saw M44, the Beehive Cluster (so I can cross another Messier object off the list). Right at the end of the night I got a nice surprise. I split my first double star: Regulus in Leo, which I didn’t even know was a double!

(Since Bad Astronomy is already taken.) The clouds lifted for the first time in 2 weeks in NJ, so Srini came over last night for some stargazing. We saw some good stuff but it was also frustrating. We saw Jupiter and Saturn but Mars was already too low down for us to catch. I had several problems with my gear:

Looks like I need to go back to the manuals for all these things and see where I went wrong. Still, it was fun to see what we could, and the view through Srini’s ETX-90 was very nice too.

I saw two excellent but very different shows over the past week. (OK actually it’s almost 2 weeks ago now…) 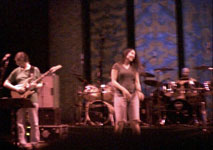 Last Friday was Dark Star Orchestra, the Grateful Dead cover band. If you’re not familiar with DSO, their shtick is that they don’t just cover songs, they cover entire shows. I was a minor-league Deadhead in college so when my friends told me DSO was coming to Princeton I jumped at the chance. So quickly, in fact, that we ended up with second row seats, woot!

Here’s the set they played (thank you DeadBase):

The whole “scene” was happening: people looking for miracles outside, super-sweaty freaked-out tripping guys and spinning hippy girls inside, etc. Of course there was no smoking inside which led to a weird scene: when the band left the stage and the crowd were cheering for them to come out for the encore, instead of lighters people held up their lit-up cell phones! It was pretty funny.

They are excellent musicians and the show (Cosmic Charlie, woo!) was fantastic. They are not kidding around about their Dead impression either – they have two drummers, their own “Donna”, and everything. As Joe put it, “You’d never know they weren’t the Dead… except their harmonies were on.” If you’ve been missing Jerry and are tired of The Other Ones, RatDog, etc (or even if you’re not), go see DSO.

Monday night was a different music direction. Kathy and I went to the new Dizzy’s Club (theoretically part of Jazz at Lincoln Center, although it is not in fact at Lincoln Center). The New School Afro-Cuban Jazz Orchestra was playing, and it was a birthday party for Candido Camero. Candido is from Cuba, and has recorded with some of the greats: Dizzy Gillespie, Charlie Parker, Duke Ellington, Ella Fitzgerald, Art Blakey, and many more. He is the originator of modern conga technique – before he came along people only played one drum at a time! Candido turned 85 and man can he still play! Along with the great music, there was cake for everyone. The band was tight and every song was preceded by a story or piece of history.

The venue was pretty cool – usually if I see jazz it’s at 55 Bar, one of my favorite dives. This place was the opposite, and so a nice change of pace. It’s pretty swank, and the musicians stand in front of a window looking out over Central Park. The cover is a steep $30, but on Mondays it’s only $15.

Last night Jupiter was at opposition, so it was looking the best it would all year. For a while the weather was looking hopeless, but late in the day the clouds all disappeared so Kathy, Jack and I got ready.

I hauled the telescope out to the backyard but was sad to see that my nighbor’s trees were blocking the southeast view I would need. I found that my scope would juuuust fit into my back seat and was ready to lug it to the park 2 miles away when Jack pointed out that from the driveway we could see Jupiter just fine.

So, we set up at the end of the driveway instead. Even though we were directly across the street from a streetlight we were able to see a lot. We could make out several bands on Jupiter and 4 moons.

From there we moved on to Saturn, in the West below the moon, and then to the first-quarter moon itself. We spent a while checking out the moon with my higher-power (9mm) eyepiece, then back to Saturn, then back to Jupiter again.

It was a great night of viewing, and I’m glad everything came together.