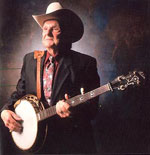 Friday night we saw a true living legend in concert: Ralph Stanley. If you don’t know him by name or know about the Stanley Brothers, you’d probably recognize his voice as the singer of “O Death” on the O Brother, Where Art Thou? soundtrack. And if you still don’t know what I’m talking about then I can’t help you.

The show was at Town Hall, which I think is a great venue. It’s nice and small, I’ve never had a bad seat, and the acoustics are good. Apparently it was designed by the same architecture firm that did a bunch of NYC landmarks: Penn Station, the Met, and Madison Square Garden. If I had to complain about something, I’d say the lobby gets super-crowded between acts. Oh and their URL is terrible: http://www.the-townhall-nyc.org/ ?! Nobody’s going to find that without Googling for it. Anyway…

The opener was King Wilkie, a fairly new band from Charlottesville, VA that do some nice old-timey music. They put on a great show and didn’t seem too intimidated (although properly awed) to be opening for such a huge act. I bought both of their CDs at intermission, and would definitely see them again when they return to the area.

After the intermission, the Clinch Mountain Boys took the stage. The band spans a wide range of ages (the youngest being Nathan Stanley on the mandolin, age 13!), and every player was a standout. On his own, each of these guys would be a star, but together they are doubly impressive.

Once the intros were over and everyone played a little solo, it was time for the man himself to take the stage – Ralph Stanley. Excuse me, Doctor Ralph Stanley (he received an honorary doctorate in music in 1976). He’s 79 years old but his voice still sounds great. His enemy “Arthur Itis” (as he put it) keeps him from playing the banjo too much but he did play a few songs. He sang and functioned as MC, introducing songs, spotlighting the players and keeping everything moving along. There was a sort of dopey vaudeville charm to the whole show. It was a blast, and I’m glad I got to see him while he’s still around to see.

If you recognize this screenshot, you probably remember Out of This World (or Another World as it was known in Europe) as one of the coolest / most frustrating gaming experiences of your younger days.

You played as Lester Chaykin, spiritual predecessor to Gordon Freeman. His physics experiment goes awry and he ends up on an alien planet. It’s an adventure/platform game with great (for its time) graphics and atmosphere.

The game is being re-released for its 15th anniversary. The graphics engine is being very slightly enhanced but will maintain the classic look. Some screenshots and more information are here.

Apparently the game’s creator, Eric Chahi has some new projects in the works as well. If you speak French, you can read more on his site. 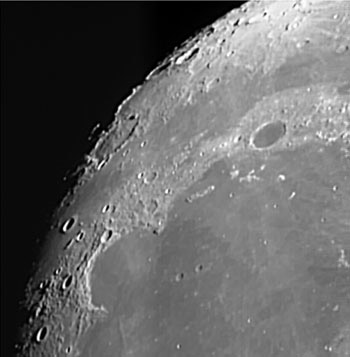 I took this image last night using the Celestron NexImage

, a cheap CCD camera that I hooked up to my tablet PC. The image is tilted about 15 degrees counter-clockwise because I didn’t line up the camera when I inserted it. Live and learn.

My handy Virtual Moon Atlas identifies the large C-shaped area as Sinus Iridum. The dark area on the left is not the “edge” of the moon, but the terminator.

The NexImage was very easy to use. It sits where the eyepiece goes and captures AVI files. I then used RegiStax, a really nice image-processing program, to comb theough the frames, average and align them to create this image. The interface is a bit kooky but there are lots of tutorials out there to get you going.

I’m looking forward to doing more of this. I may invest in a field reducer so I can fit more of the moon in a shot. Hopefully next time I will get an image of Saturn. The NexImage is only good for lunar and planetary imaging, but with a dobsonian mount that’s all I’d be able to do anyhow. 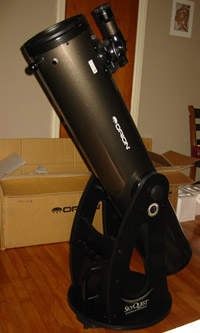 Well, last week I broke down and ordered a telescope. After a lot of research and help from people on the Cloudy Nights and SLOOH forums, I decided on the Orion XT8i. It’s a Dobsonian scope with an 8″ mirror.

After some FedEx weirdness, it arrived Tuesday night. Of course the skies were cloudy (apparently this is what happens when you get a new scope) but that just meant I could take my time putting it together carefully.

The instructions say setup takes about 30 minutes but I think it took me about three times as long; partially because I was double- and triple-checking each step. I documented the assembly process with pictures but they kind of dull so I will spare you. It’s pretty much like putting together a piece of Ikea furniture, but with encoder boards. In the end I turned out to be two pieces short: a washer for the vertical stop (to allow you to adjust the straight-vertical position), and the altitude-encoder cable. Neither piece would prevent me from using the scope, but would rule out the Computerized Object Locator. Orion has assured me that the parts are on the way.

Wednesday it rained and snowed, so there was no luck that night either! I figured I would collimate the scope so I would be all set for whenever the weather cleared. I’m happy to report that no collimation was necessary – all the optics were aligned perfectly, even after shipping and assembly.

Finally on Thursday night the weather cleared and Kathy and I took it out to the backyard. After allowing the scope to cool down to the outside temperature we were ready to go.
In my excitement I tried to skip aligning the finder scope and go straight to the moon but that didn’t work out. This is my first scope so I was having a hard time steering the upside-down-and-reversed image. Aligning the finder took only a minute: center scope on bright star, look through finder, turn two thumbscrews until star is centered in finder. After that it was simple to get the moon in the finder (which has a pretty wide field of view).

That first view of the first-quarter moon was fantastic. Everything was sharp and surprisingly bright – almost like someone was shining a light into your eye. I had an afterimage of the moon in my eye for quite a while. Next time I will use a polarizing filter so I can look longer.

Then we looked at Saturn, which was just below the moon. Although it looked (obviously) much smaller than the moon, Saturn still looked great. I believe I saw one of its moons nearby but I will have to check reference to confirm.

We tried the Orion nebula next but at that point it was too near the horizon and washed out by light pollution.

It was a great night. Next clear skies will be Sunday night and we will try out the high-power (9mm) eyepiece, polarizing filter, and maybe the NexImage camera. Hopefully the missing parts for the Object Locator will come soon and I can report on that too.