is funny. It’s great that they survived for another season. Last night’s season opener was great as usual*, with tons of running jokes and callbacks. Lindsay’s AD theme ringtone was a nice touch, and of course they’ve set up Oscar’s blog site, I’m Oscar.

This show is so dense with jokes, it’s like The Simpsons in its heyday. I think you need a TiVo to catch them all. There’s also not much pity for those “just tuning in”. The story moves forward without recap. It’s possible to enjoy without knowing what happened before, but there’s twice as many jokes if you do know.

The writers and cast were robbed at the Emmys this year. There’s no dead weight on the show.

*Except that Martin Short episode. :: shudder ::

Over the past few months I’ve been getting into Games Workshop’s Lord of the Rings miniatures game. The rules are flexible enough to allow everything from small character-driven skirmishes all the way up to sieges. I’ve only played a few times, but I’ve got quite a pile of figures waiting to be painted. (It never entered my head, until a random comment from my brother’s girlfriend, that I could play with unpainted minis!) 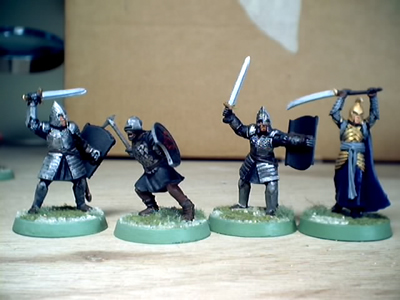 I picked up the new Fellowship of the Ring supplement this weekend, and it’s very very good.
It has 18 scenarios to take you through the whole book/movie. It also notes where the two diverge, which is nice – for example you can use Arwen or Glorfindel in the “Flight to the Ford” scenario.

GW’s site has a list of the scenarios and some battle reports.

The terrain-building section alone makes it worthwhile to me, and helps you create good re-usable terrain. The modular Moria terrain is outstanding; you create scenery that can be used for Balin’s tomb, the Dwarrowdelf, and the bridge of Khazad Dum.

Now I’m all fired up, working on my Moria Goblin army.

Here’s a pretty wild story about a Corp being infiltrated and brought down from the inside.

I tried to do the 14-day trial for Eve Online once but I never made it through the tutorial. The game is very very dense. I remain intrigued though, and maybe one day I’ll go back. I will say that it has one of the best character customization screens I’ve ever seen.

Half Life 2 players probably already know about Garry’s Mod, which lets you turn HL2 into a sandbox for Rube Goldberg machines. You can spawn any object in the game, and weld objects to each other. You can attach thrusters, ropes, pulleys, wheels, saw blades etc and make some pretty crazy stuff happen. It’s fun but sort of pointless.

There’s a meta-mod(?) for Garry’s Mod called Onslaught that takes it further. In this mod, you spend as long as you want setting up your defenses. When you are ready, you press the red button in the center of the map, unleashing a tide of headcrabs. These are followed by waves of increasingly tougher enemies. You’ll never win, but it’s fun to see how long you can hold out.

You can even play multiplayer on the net. After several hours of making dragsters out of couches, spinning playground toys with flaming saw blades, and cars with exploding barrels welded to them, I highly recommend this mod!