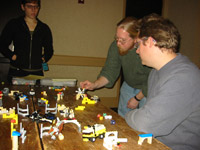 This weekend Rick and I went to Dreamation, a gaming convention in nearby East Brunswick. On Friday we played in a couple of excellent indy RPGs (Primetime Adventures and Mortal Coil). Saturday we met up with a bunch of the excellent nerds of NerdNYC, and in the afternoon we played Mechaton.

Mechaton is a wargame of giant fighting mechs – BUT – everything (the mechs, the scenery, the ruler) is made of Lego! We were lucky enough to get into a game run by Vincent Baker, the creator of the game. (He’s also the man behind the indy RPG Dogs in the Vineyard, which I didn’t find out til later!) 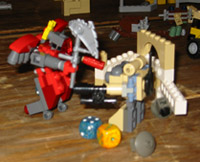 We were joined in the session by Gaming Steve and a young woman whose name I have unfortunately forgotten. When we arrived Vincent had already set up an array of sweet-looking mechs and vehicles, bristling with weapons, for us to choose from. I immediately yelled out “I want that red one with the axe!” I wish I had brought my good camera – the pictures I took don’t do justice to how cool the mechs and scenery looked. Once we had selected our forces, we placed them amid the ruins and got down to the business of smashing each other’s robots to pieces.

Vincent explained the rules as we went along. The first turn was a little bumpy with all the different kinds of dice flying around, but once everything clicked I realized what an excellent system it is. 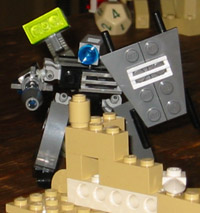 To summarize, you can have up to 4 attachments on a mech: weapons with various ranges(red dice); movement like wings, jump jets or wheels (green dice); defensive like armor, ECM, or camoflage (blue dice); and communication like radios and spotlights (yellow dice). Every mech also gets 2 white dice which are “wild”. As you take damage, you lose attachments and the dice that go with it. As the mechs get damaged you break the pieces off and scatter them around the battlefield. If you lose your 2 white dice, you are completely destroyed.

The game lasted several hours. It was a blast as we tried to hold our objectives and take each other’s away. The system held up to everything we tried to do (and of course having Vincent there made it a breeze). I just barely squeaked out a victory. I’m really itching to play again so of course the next day I was scurrying to BrickLink looking for the perfect mech-building pieces.

For the full rules, download them from the Mechaton site above, or even better, support indy gaming by buying a printed copy from Indy Press Revolution!